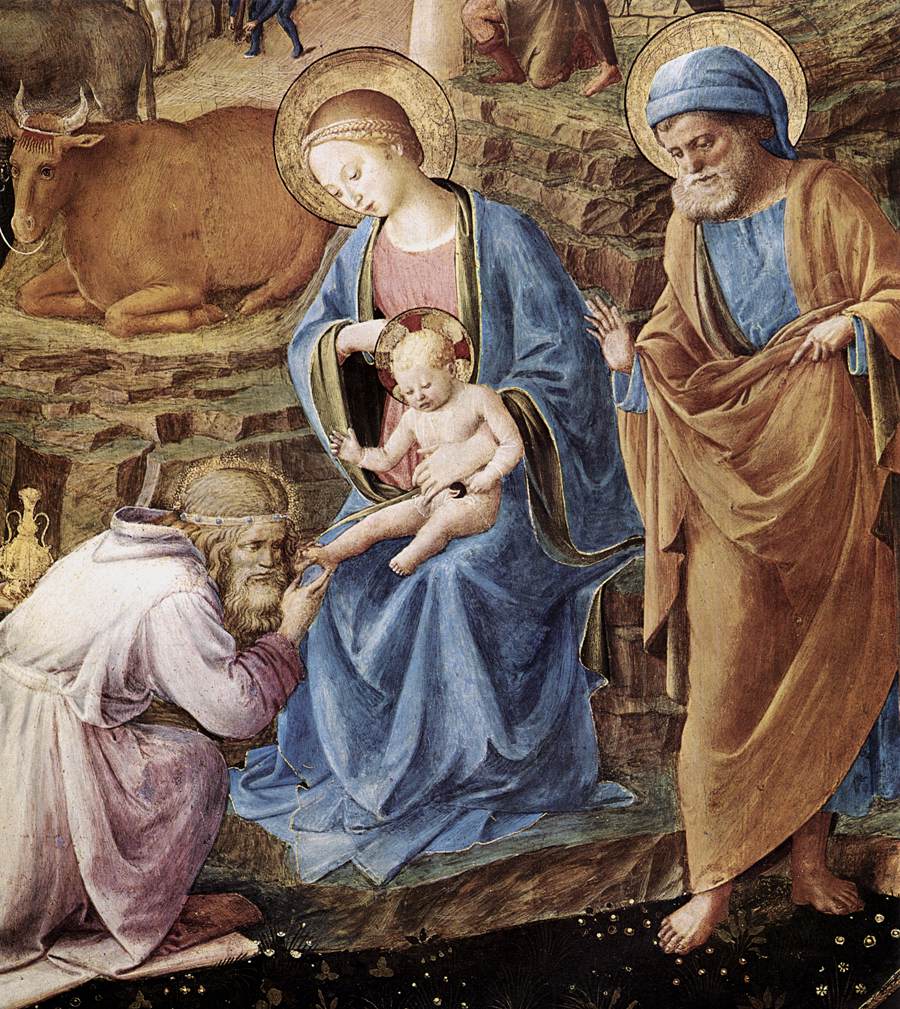 The story of the Epiphany (a word which means ‘manifestation’ or ‘showing’ in Greek) is familiar to us all. The three Magi, sometimes represented as kings, are on a journey with an obscure goal: to find the king whose star they had seen. The gospel adds a further detail: the wise men ‘have come to do him homage’. This is perhaps the most significant line in the gospel for Epiphany because it points to the essential moment in the story of the Magi: the moment of worship.

The Gospel of Matthew, from which this reading comes, has no account of Christ’s birth in the stable but if we supply these details from Luke’s Gospel we have a stunning two-part story. Firstly, the Son of God is born, not in a position of status, but in a place of degradation. Secondly, even there, in a filthy stable, he draws the attention of the powerful who, in turn, abandon their dignity as they ‘fall to their knees’. The journey in both cases is from possession to emptiness, and this journey finds its climax in Calvary: ‘he emptied himself, taking the form of a slave, becoming as human beings are; and being in every way like a human being, he was humbler yet, even to accepting death, death on a cross’ (Phil 2:7,8). Without knowing it, the Magi are acting ‘with the mind of Christ’ and so they have something to teach us who also seek to follow Him.

Scripture does not tell us that the wise men were kings, but this moment of worship reminds us of a kingly group in the Book of Revelation, where the twenty-four crowned elders ‘prostrated themselves before [the Lamb] to worship the One who lives for ever and ever, and threw down their crowns in front of the throne’ (Rev 4:10). These two dramatic moments – the wise men falling on their knees, the elders casting down their crowns – show us what true worship looks like. We bring to Christ the best of what we have, our gold, our frankincense, our myrrh. We worship him, kneeling before him. And we let go of any illusion of self-sufficiency, throwing down our crowns.

Our society praises the ‘self-made man’, but today’s gospel reminds us that nobody is truly self-made and that acknowledging the truth of our existence is to acknowledge something greater than us. According to the Christian faith, our highest dignity is found in worshipping God. Paradoxically, we are most exalted when we make ourselves small before our creator. Crowns, gold, frankincense and myrrh – they are all heavy and weigh us down. Are we ready to hand them over, to cast them down, and to fall on our knees?

After Jesus was born in Bethlehem in Judea, during the time of King Herod, Magi from the east came to Jerusalem and asked, “Where is the one who has been born king of the Jews? We saw his star when it rose and have come to worship him.” When King Herod heard this he was disturbed, and all Jerusalem with him. When he had called together all the people’s chief priests and teachers of the law, he asked them where the Messiah was to be born. “In Bethlehem in Judea,” they replied, “for this is what the prophet has written: ‘But you, Bethlehem, in the land of Judah, are by no means least among the rulers of Judah; for out of you will come a ruler who will shepherd my people Israel.’” Then Herod called the Magi secretly and found out from them the exact time the star had appeared. He sent them to Bethlehem and said, “Go and search carefully for the child. As soon as you find him, report to me, so that I too may go and worship him.” After they had heard the king, they went on their way, and the star they had seen when it rose went ahead of them until it stopped over the place where the child was. When they saw the star, they were overjoyed. On coming to the house, they saw the child with his mother Mary, and they bowed down and worshiped him. Then they opened their treasures and presented him with gifts of gold, frankincense and myrrh. And having been warned in a dream not to go back to Herod, they returned to their country by another route.

Lectio Divina – Quotes related to the Third Sunday of Advent

Lectio Divina – The Baptism of Our Lord
This site uses cookies to provide a good browsing experience: find out more on what cookies are.
Scroll to top