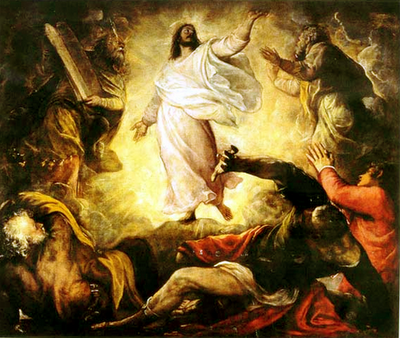 The Transfiguration gives us a rare glimpse into Christ’s divinity and interior life, while at the same time pointing towards Christ’s sacrifice on Calvary. When we read of this mystical event in the gospels, we can immediately imagine Peter, James and John struggling to explain to the other Apostles later on, exactly what it was they had seen up there on Mount Tabor. But on reading what they saw one gets the impression that they are to some extent at a loss to explain the mystery that happened. Jesus’ appearance changed and his clothes became a dazzling white unlike anything to be found in this world. It is an event utterly beyond their comprehension.

As they are trying to come to terms with what they are seeing, a voice from a cloud comes and tells them ‘This is my Son, the Beloved. Listen to him. This is the voice of the Father who no man could see and live. He is hidden in the cloud, veiled so they cannot see His Face. But they can see Jesus, the image of the Father, right in front of them. Seeing Christ, they have seen the Father. Yet now, he is back to his original appearance. All the divinity they got a glimpse of, has disappeared, the extraordinary hidden in the ordinary. The event leaves the Apostles speechless. It is Christ who speaks, to tell them not to tell anyone until after his death and resurrection. After this event, everything in the gospel will be moving towards the final passion, death and crucifixion of Jesus Christ.

Peter, James and John will descend the mountain with Jesus, into the valley below where they will find Gethsemane and Christ’s agony in the garden. Here in the valley, Christ’s divinity will be hidden in his humanity, the extraordinary in the ordinary. Significantly, Peter, James and John will once more be the Apostles Jesus wants present to witness this. They have caught a glimpse of the divinity of Christ on mount Tabor and at Gethsemane they glimpse his humanity. The next time Christ ascends a mountain, it will be mount Calvary. On Calvary Christ will offer himself as a sacrifice to the Father, in expiation for our sins. The divinity we saw on Mount Tabor and his suffering humanity, are inseparably united on the Cross of Calvary. And the Father in the cloud on Tabor speaks to us and says “Listen to him”. Christ is indeed our way to the Father, but his way is the way of the Cross, where the extraordinary is hidden in the ordinary, where Mt Tabor is in a sense, hidden in Calvary, Christ’s divinity hidden in his humanity. Let us then remember then as we journey on this Lent that all the ordinary crosses we carry, take us to a place like Mt Tabor, where we too will be transfigured and live in glory.

”Six days later, Jesus took with him Peter and James and John and led them up a high mountain on their own by themselves. There in their presence he was transfigured: his clothes became brilliantly white, whiter than any earthly bleacher could make them. Elijah appeared to them with Moses; and they were talking to Jesus. Then Peter spoke to Jesus, ‘Rabbi,’ he said, ‘it is wonderful for us to be here; so let us make three shelters, one for you, one for Moses and one for Elijah.’ He did not know what to say; they were so frightened. And a cloud came, covering them in shadow; and from the cloud there came a voice, ‘This is my Son, the Beloved. Listen to him.’ Then suddenly, when they looked round, they saw no one with them any more but only Jesus. As they were coming down from the mountain he warned them to tell no one what they had seen, until after the Son of man had risen from the dead. They observed the warning faithfully, though among themselves they discussed what ‘rising from the dead’ could mean”.

Ears to Hear – Lent 3
This site uses cookies to provide a good browsing experience: find out more on what cookies are.
Scroll to top