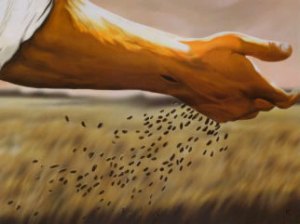 In the middle of this Sunday’s Gospel we find Jesus quoting the following prophecy of Isaiah: ‘You will listen and listen again, but not understand, see and see again, but not perceive. For the heart of this nation has grown coarse, Their ears are dull of hearing, and they have shut their eyes, For fear they should see with their eyes, hear with their eyes, Understand with their heart, and be converted and be healed by me’.

It is in response to the question posed by the disciples of Jesus as to why He speaks in parables. At first sight the reply seems a bit harsh.  Jesus says that ‘the mysteries of the kingdom of heaven are revealed to you, but they are not revealed to them’. This suggests that Jesus by making his saying obscure so they do not understand does not want to include the other people. It is as if he has some favourites who alone are allowed to know the full truth.

However, when reading this prophecy quoted by Jesus in His answer it becomes clear that there is more depth to what He means. The parables Jesus uses are  ways of bringing a message to people that can speak to their hearts and not only to their minds. The Word of God is not simply a collection of words represented by their objective meaning, but something much richer, presenting a much deeper reality. In the first reading, which is also a prophesy from Isaiah, we read ‘the word that goes from my mouth does not return to me empty, without carrying out my will and succeeding in what it was sent to do.’ It is by the Word (logos) that the whole world is created. As with the seed in the parable in the Gospel, the Word of God is not just something passive but something active that could render a rich harvest.

The encounter with the Word, the encounter with Jesus, does make a real difference. But this can only happen when we are open to its action. This is clear in the words of Isaiah, it is not that the people cannot perceive the meaning, but they ‘shut their eyes lest they see’, and be converted and healed by Jesus. The encounter with God is an invitation into communion with Him. We have to open our hearts towards Him, we have to allow Him to enter and to be with us.

The seed, or the Word as Jesus explains to his disciples, which falls on rocky ground and does not find any understanding does not get a chance to develop. There is no commonality between the Word and the recipient, as the recipient is not interested in its meaning. Similarly with the seed without roots, where initial enthusiasm might have welcomed the Word, but the totality of the message is rejected, resulting in a rejection of God as soon as basic fundamentals are challenged or the message becomes inconvenient. Similarly the seed which is overgrown by thorns represents a lukewarm-ness where the presence of God does not really make a difference, and eventually becomes irrelevant.

All these ways are a result of ‘shutting their eyes for fear they see’. It is not fully opening up our hearts to God, and not allowing Him to work in us, not allowing him to heal us and not allowing him to become our friend. God is continually knocking on the door, so we can let Him in and He can make our lives complete. It is only in God that we can find true happiness, after this life, but as important, also during this life. Once we open our heart to God, when we listen to the Word and understand, when we see and are healed, then we will become the seed that bears plenty of fruit.

The Path of Littleness

Symposium – Johannes Scotus Eriugena
This site uses cookies to provide a good browsing experience: find out more on what cookies are.
Scroll to top