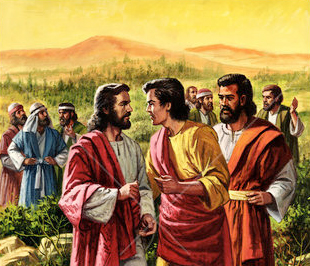 This Sunday’s Gospel passage opens with an astonishing request from the Apostles James and John. They boldly request that Jesus do for them whatever they ask of him! They don’t just simply ask Jesus a question, they preface it with a demand. And what do they ask for? Nothing less than to be given seats of authority either side of Jesus in his Heavenly Kingdom. Wow! What about that for a demanding request! They seem to be very self-assured that they deserve this privilege. What about the rest of the Apostles? What about Peter, the leader of the Apostles? Surely James and John are skipping the queue a bit here?

In the passage just before this Sunday’s Gospel passage, St Mark recounts how Jesus explained that all those who would give up worldly riches and ambitions for the sake of spreading the Gospel would be rewarded a hundredfold in this life and the life to come. It would appear that James and John, in their impetuousness, decided to try to cash in early on their promised Heavenly reward by asking for privileged positions ahead of time. The other Apostles may have been thinking along the same lines as them but it was these two who decided to act and try to grab first place for themselves. It’s no wonder that the rest of the disciples became indignant with them! But this anger is contrasted with the calm of Jesus who responds calmly to their request by asking them what they want him to do for them. This reply of Jesus speaks to me of the profound patience and the immense love of God, which fuels this patience, when dealing with us, his imperfect and often demanding children. Moments of realisation like this, about how loving and patient God is and has been with me, are always a timely reminder of how I need to be more loving towards, and patient with, others.

The disciples are also taught a very valuable lesson by Jesus as a result of this incident. Jesus tells them that that they must not try to put themselves first, as the earthly rulers do, but rather to make themselves the servants of all, following Jesus’ example. Jesus, who is the King of Kings, came not to be served but to serve us, his creatures. He demonstrated this throughout his whole public ministry and in a very practical and symbolic way at the Last Supper when he washed the Apostle’s feet. As well as teaching his Apostles this valuable lesson, Jesus is also asking each of us, as his disciples, to serve one another in love. This is how the Kingdom of Heaven will grow on earth. As Jesus himself said, people will know that we are Christians by how we love one another. Without having to say a word, our loving treatment of others can be the greatest Christian witness we can give. As St. Francis is often quoted, ‘Preach always and when necessary, use words’.
This Gospel passage is also yet another example of the real and imperfect humanity of the Apostles, imperfections which have not been glossed over or omitted from the Bible to try to make the Apostles look better and this is one of the greatest testaments to the authenticity of the Gospels. The stories they tell have been written down warts and all. It also shows us that we don’t have to be perfect to be chosen by God to be his disciples. Our growth in holiness is something that we spend our whole lives striving to achieve by walking each day with Jesus and learning from him, as the Apostles did.

And James and John, the sons of Zeb’edee, came forward to him, and said to him, “Teacher, we want you to do for us whatever we ask of you.” And he said to them, “What do you want me to do for you?” And they said to him, “Grant us to sit, one at your right hand and one at your left, in your glory.” But Jesus said to them, “You do not know what you are asking. Are you able to drink the cup that I drink, or to be baptized with the baptism with which I am baptized?”
And they said to him, “We are able.” And Jesus said to them, “The cup that I drink you will drink; and with the baptism with which I am baptized, you will be baptized; but to sit at my right hand or at my left is not mine to grant, but it is for those for whom it has been prepared.” And when the ten heard it, they began to be indignant at James and John.
And Jesus called them to him and said to them, “You know that those who are supposed to rule over the Gentiles lord it over them, and their great men exercise authority over them. But it shall not be so among you; but whoever would be great among you must be your servant, and whoever would be first among you must be slave of all.
For the Son of man also came not to be served but to serve, and to give his life as a ransom for many.”

What Must I Do To Inherit Eternal Life

Blind Bartimaeus Receives His Sight
This site uses cookies to provide a good browsing experience: find out more on what cookies are.
Scroll to top