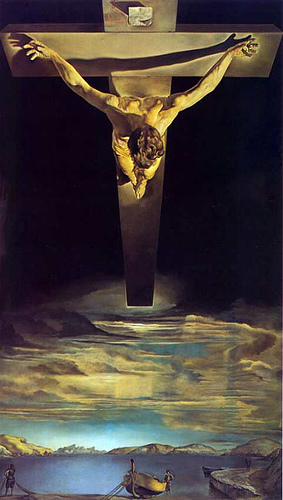 ‘Save yourself’. That is what all the people said to Christ in today’s Gospel. ‘Save yourself’ : that was the kind of Messiah they would worship – a Lord of might and majesty; a spectacular miracle-worker; someone who was into self-preservation and keeping the people on his side.

Yet the crowd gathered that day on Golgotha were seeing something very different: a man alone, without any defender, giving himself up to all the agonies of the Roman crucifixion. He was aware that he was dying but there was no trace of anger or pleading from him. As he was nailed to the cross and raised up on it, there was no proud defiance and no tears of self-pity. Instead they saw him abandoning himself to his fate, praying to God his ‘Father’, and interceding on behalf of the ones who were killing him.

What kind of King was he? The soldiers mockingly addressed him as ‘King of the Jews’ but surely very few there would have thought that he looked like a king. Don’t kings reign from exalted thrones, giving out imperious orders to their followers gathered around them, while all the time enjoying all the comfort and luxury that money can buy? And here was Jesus, condemned to a shameful death, exposed to the general public for derision and mockery, and most of all defenceless and spiritually alone.

This is the same scene that is before our mind’s eye today, but a Christian soul can see so much more: of course he sees the Lord Jesus faithful to his mission to the Father, refusing to compromise from the way of charity he had always professed, and still calling his people to himself in love. But more than that, he, with the light of the Holy Spirit, sees the Universal King reigning on the cross. He sees how the Lord has looked on his people lost in the storms of weakness and sin, and has come down from heaven himself to be their redeemer.

He is paying the price of redemption to the last bitter drop, and yet simultaneously he is reigning as the triumphant King, the one who has finally defeated the old enemy and will be forever the Saviour, ‘the only name by which we can be saved’ (Acts 4:12). He is delivering to us the most precious gifts – the forgiveness of our sins, the breaking down of all barriers between peoples that could have kept them from God, and the promise of the life of love and union with him now on earth and afterwards forever in heaven.

And the most wonderful thing of all is that this new life is offered to every soul on the face of the earth, and we can begin living it at any moment. It all happened on one day 2,000 years ago, but it is resounding loud and clear today and every day. The graces that were offered with the shedding of the King’s blood are as alive and available as they were for the crowd on Calvary.

So, on this great feast, maybe we could take a moment in prayer, and place ourselves in front of the Cross, and look upon Jesus there. He chose not to ‘save himself’, but to save you and me. We can look up at the King’s face, and be filled with confidence and trust, and know that his Kingdom of love will never end.

The people stayed there watching Jesus. As for the leaders, they jeered at him. ‘He saved others’, they said ‘let him save himself if he is the Christ of God, the Chosen One’. The soldiers mocked him too, and when they approached to offer him vinegar they said, ‘If you are the king of the Jews, save yourself’. Above him there was an inscription: ‘This is the King of the Jews’. One of the criminals hanging there abused him. ‘Are you not the Christ’? he said. ‘Save yourself and us as well’. But the other spoke up and rebuked him. ‘Have you no fear of God at all’? he said. ‘You got the same sentence as he did, but in our case we deserved it: we are paying for what we did. But this man has done nothing wrong. Jesus’, he said ‘remember me when you come into your kingdom’. ‘Indeed, I promise you’, he replied ‘today you will be with me in paradise’.

Videos of the Province of St. Joseph Discussion on the address of Pope Benedict XVI in Hyde Park – Part 1
This site uses cookies to provide a good browsing experience: find out more on what cookies are.
Scroll to top