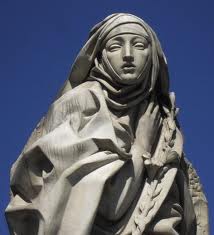 The beauty of today’s Gospel lies in the excitement and wonder that is expressed in the first verse: ‘The beginning of the Good News about Jesus Christ, the Son of God’. It is as if St Mark has gathered the essence of the whole Gospel into that phrase. You can feel the urgency in the writer, and the excitement that this proclamation brings about. It is as if Mark wants to start his Gospel shouting from the rooftops, letting everybody know that this is Good News indeed, and that the Good News has a name, Jesus, and a place is waiting for everyone who has ‘ears to hear’.

This Gospel makes plain that the coming of Jesus Christ on earth was not something that happened in the abstract, or in a vacuum separated from human life. We see that Jesus is the fulfilment of the hopes of those who went before him like the prophet Isaiah, the ones who had lamented the state that man had fallen into and had cried to heaven for salvation. We see that it had an impact in the ‘present’ time of Our Lord, as the Holy Spirit drives John the Baptist into the wilderness to preach repentance to the people of Israel, and the people respond, with hordes going to John seeking forgiveness of sins and a new start with God. And we see how the Incarnation will also point forward into the future, as John says ‘Someone is following me’. The Gospel is never a static thing, and never simply one moment that passes. It means conversion of life, of our whole lives and the paths that lie ahead in the future.

If there is one thing in this passage that we might take for reflection especially in Advent, it is the call to repentance and confession which John makes and the Jewish people embrace. Of course we would much rather be up in the heights of spiritual exultation and feeling that everything is fine between ourselves and God, and there is nothing wrong with that. But ‘for everything there is a season’, and since in Advent we are both looking to the coming of Christ in the manger of Bethlehem, and looking to his second coming at the end of time, it is the right moment for a honest examination of conscience.

Are we, like John the Baptist, being the ‘messenger….sent before’ Jesus, by being unafraid to witness to our beliefs and letting our light shine out for all to see? Are we ‘preparing a way for the Lord’ in our hearts by making time for prayer every day, so that we become used to conversing with him and know him as our great Friend? And are we going to really make a break with the past and be freed from our sins by going to the Sacrament of Confession?

These are not easy decisions to make. But through it all bear in mind the loving and merciful heart of Jesus Christ. He who is to come is the One who truly know us, and can give us peace.

The beginning of the good news about Jesus the Messiah, the Son of God,as it is written in Isaiah the prophet:

“I will send my messenger ahead of you,
who will prepare your way”—
“a voice of one calling in the wilderness,
‘Prepare the way for the Lord,
make straight paths for him.’”

And so John the Baptist appeared in the wilderness, preaching a baptism of repentance for the forgiveness of sins. The whole Judean countryside and all the people of Jerusalem went out to him. Confessing their sins, they were baptized by him in the Jordan River. John wore clothing made of camel’s hair, with a leather belt around his waist, and he ate locusts and wild honey. And this was his message: “After me comes the one more powerful than I, the straps of whose sandals I am not worthy to stoop down and untie. I baptize you with water, but he will baptize you with the Holy Spirit.”

Be On Your Guard!

We Joyfully Await His Coming
This site uses cookies to provide a good browsing experience: find out more on what cookies are.
Scroll to top