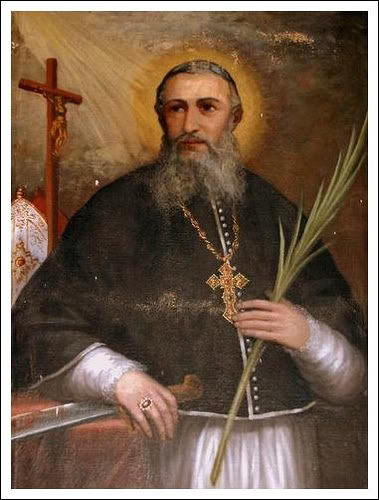 “This stranger, who was introduced clandestinely into the kingdom, spends his life in the study of things of the heart and in the meditation on what is incomprehensible…” (From the death sentence of Bishop Ignatius Delgado). This group of 117 martyrs, of which Bishop Delgado OP was part, suffered and shed their blood out of love for Christ in the region known today as Vietnam. Of this group, 59 were associated to the Dominican Order.

There is little known of the life of these martyrs before they were captured. Bishop Delgado died together with bishop Dominic Henares OP and a catechist. Both bishops were from Spain and bishop Delgado was born in 1762. From the sentence of condemnation itself we learn that Bishop Delgado had laboured for nearly fifty years in Tonkin, which argues that he must have been a resourceful man as well as a zealous one, before he died at the age of seventy-six.

In 1838 the two bishops and the catechist were captured, in a persecution recently stirred up. A copy of his trial showed that he answered truthfully and fearlessly where he himself was concerned, but that no amount of questioning or torture could make him reveal the whereabouts of his companions. Bishop Delgado, an old man of seventy-six, endured the tortures rather than give any clue as to where they might be found.

This account is only one of the almost uncountable accounts that witness to the dedication of the missionaries to “proclaim the Gospel to the end of the earth”. Their knowledge of Jesus, and the joy which this brought to their lives, made them fearless even in the sight of death. The next Dominicans who came to the region, Bishop Hermosillo and his companions, would also, as they knew, also be destined to shed their blood for Christ.

Dominicans of the St. Joseph Province on EWTN Fr. David Barrins on RTE Radio 1
This site uses cookies to provide a good browsing experience: find out more on what cookies are.
Scroll to top