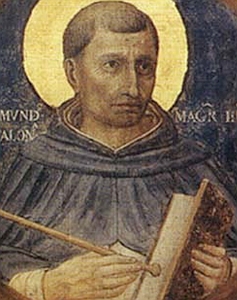 Born at Penafort castle, near Barcelona in Spain, in 1175, Raymond was the gifted son of the count of Penafort. Due to his status and wealth, he was well educated and at the age of 20, was already a professor of philosophy at Barcelona university. He left Spain in 1210 to attend the university in Bologna, Italy, and complete his studies in canon law. By the age of 41 he had earned doctorates in both canon and civil law. He taught canon law in Bologna university for three years. It was here that he first met the Dominicans. He was attracted to the Order by the preaching of Blessed Reginald of Bologna and received the habit in 1222 in the Dominican Convent of Barcelona at the age of 47. Raymond had a strong devotion to Our Blessed Mother, and it was this devotion that led him to forgo worldly fame and become a Dominican.

At Barcelona, in 1218, he was co-founder with St. Peter Nolasco of the Order of the Blessed Virgin Mary of Mercy after he saw a vision the Blessed Virgin Mary who instructed him to cooperate with his penitent St. Peter Nolasco, and with James, King of Aragon, in founding the Order. It was established to help free Christian captives from the Muslims. The members of the order took a vow to offer themselves to the Muslims in exchange for the Christian captives they held.

At the request of Pope Gregory IX, St. Raymond produced a collection of canon law. He also published several editions of the Summa Casuum – a guide for confessors and moralists on the rules of sins.

As a result of his strong influence in academia and the university setting, his virtuous character, his great works, and his gift for preaching, there was an influx of vocations to the Dominican Order. He was famous for his preaching to Moors and Christians throughout Spain and was convinced that Christians could only convert others if their own lives set an example of selflessness and holiness.

In 1235, Pope Gregory named him archbishop of Tarragona, but Raymond declined the offer and returned to Barcelona to recover from a serious illness. Once he had recovered he resumed his work as a preacher and confessor, and was successful in making many conversions.

In 1238, Raymond was elected Master General of the Dominicans at the general chapter in Bologna but he resigned two years later on account of his advanced age. During his time in office he published a revised edition of the Dominican Constitutions, and it was at his request that St. Thomas wrote the Summa Contra Gentiles.

He was appointed at different times as confessor to the pope and king, and as a papal penitentiary he pronounced on difficult cases of conscience.

Raymond was canonized by Clement VIII in 1601 and he is the patron saint of lawyers, including canon lawyers, and schools and faculties of law.

From a letter by Saint Raymond:

Look then on Jesus, the author and preserver of faith: in complete sinlessness he suffered, and at the hands of those who were his own, and was numbered among the wicked. As you drink the cup of the Lord Jesus (how glorious it is!), give thanks to the Lord, the giver of all blessings. May the God of love and peace set your hearts at rest and speed you on your journey; may he meanwhile shelter you from disturbance by others in the hidden recesses of his love, until he brings you at last into that place of complete plenitude where you will repose for ever in the vision of peace, in the security of trust, and in the restful enjoyment of his riches.

Sons and Daughters
This site uses cookies to provide a good browsing experience: find out more on what cookies are.
Scroll to top