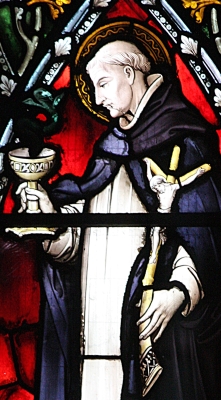 Friar and Priest, Memorial
Saint Louis was born in Valencia, Spain, on January 1, 1526, and in 1544 entered the Order against the wishes of his parents. He came to so exemplify the ideals of Dominican life that he was appointed master of novices. Combining an austere life with zeal for spreading the gospel, he asked to be sent to the farthest parts of the Americas and in 1562 was sent to what is now Colombia. He was given the gift of communicating with the Indians in their own tongues and with the encouragement of Bartolomeo de Las Casas defended their rights against the Spanish conquerors. He returned to Spain in 1569 and again assumed the position of master of novices. He died at Valencia on October 9, 1591. Saint Louis is the patron of novitiates and formation personnel.

Second Reading
From a treatise of Saint Louis Bertrand On the Dignity of the Apostles and of Apostolic Preachers.
“My commandment is that you love on another.”

This passage from the Gospel is part of the divine discourse that the Redeemer addressed to his disciples after the Last Supper as he was leaving them to face death. Among the consolations that Divine Wisdom offered to lighten their sorrow in his absence was this one: to love one another, for love is a great consolation for the afflicted when they love and protect one another. He instituted the sacrament that would comfort them; he promised to send the Holy Spirit and to pray to his Father on their behalf. He also gave them this remedy, namely, to love one another and to do good to one another. In truth this love which he demands is of no small importance, for it is the weight that moves all of Christianity. And he demands it for several reasons.
First of all, it is a duty to be loving. Love is only paid back by love. And since I have loved you to the point of giving my life for you, it is necessary that my love be measured against a love that only your mutual love will bring about. He proves that he has loved us for other reasons. First: No one has greater love than this, to lay down one’s life for one’s friends. Then there is the fact that he has chosen us for the highest task: I chosen you out of the world… to go and bear fruit. Thirdly, there is his promise: The Father will give you whatever you ask in my name. And so that your attitude may serve as a gauge he concludes just as he had begun: I command you to love one another. In return for what I have done for yon I only want you to love one another.
There is no other passage in the gospel where Christ invites us to love to the extent that he does in this one. For Christ desires nothing so much as that we love one another, and this he demands as his due, because we owe it injustice. For injustice you must love your neighbor, because Christ has acquired this love for you and has given nothing less for it than his own love.
Finally, in the Gospel Christ has pointed out three kinds of friendship. The first is the love of Christ himself for us. He demonstrates that this friendship is true and lacks nothing for he has given his life, he has revealed his secrets, and he will do what we ask of him like a faithful friend who can refuse nothing. He demonstrates that he is a faithful friend particularly to the apostles, for he gave them such an exalted task — saving souls, the fruit of which endures forever.
The second kind of friendship is mutual affection between human beings. Christ demands this affection and friendship in justice and as something owed, for he has loved us that we might love one another with a true love and a sincere friendship.
The third kind is the friendship of human beings with God. This friendship is demonstrated by the determination to obey God and to accomplish what God has commanded us: You are my friends if you do what I command you. For a good understanding of this, we must take note and recognize that there is a friendship of superior for inferior, of equal for equal and of inferior for superior. Since friendship is the communication of goods, these three kinds of friendship carry out this communication in different ways. Friendship of superior for inferior consists in giving a share in one’s goads, as Christ says: The Father will give you whatever you ask in my name. And I have given you my life, my blood and the most excellent task of converting souls.
Friendship between equals consists in dividing goods between one another in mutual love and assistance. This is Christ means when he says: Love one another as I have loved you.
Friendship of inferior for superior consists in obedience and service. This phrase describes it: You are my friends if you do what I command you.

Alternative Second Reading
From a sermon of Saint Louis Bertrand.
“From the desert you should go forth as a good preacher.”

The Holy Spirit kept John in the desert, lest he see or come to know Christ, because of the importance of the testimony that he would give later concerning him. John testified that he had never seen Christ until the moment that he saw the dove descending upon his head in the Jordan River. I did not know him, but the one who sent me to baptize with water told me, “On whomever you see the Spirit come down and remain, he is the one who will baptize with the Holy Spirit.”
That was the place where the voice of the Father was heard speaking about the Son. There the Holy Spirit adorned him with such great virtues — humility, meekness, and all the rest — that he came forth from the desert changed into that salt which would save the human race from corruption, changed into that light which would illumine the blind, changed into a fortified city where the holy and virtuous would find refuge.
This is the high office of a preacher, and from this it is clear that it demands such a preparation. Why should you wonder, [brother,] that your teaching does not bring forth fruit, when you come to preach not from the desert but from the confused tumult of your own soul, not from the vicinity of virtue but of pride? From the desert you should go forth as a good preacher. If Christ our Lord spent the whole night in prayer to send out his disciples to preach and to have their preaching bear fruit, what can a preacher accomplish without devotion? If you do not come from the desert, your preaching will not bear fruit. And because you have the voice of Jacob but the hands of Esau, concern yourselves with being effective preachers. Truly seek prayer, a place of retreat and solitude, otherwise you can never attain the reward of good preachers.
God called John to be a preacher and this was a great penance for him, for every state of life demands a certain amount of penance, if it is received from the hand of God. It is for God to place you upon that cross on which you ought to serve God. Truly it is not up to you to choose that cross, because although you may choose a heavier cross, you might not be saved by it since God has not placed you upon it. The Lord himself did not accept that young man who offered to follow the majesty of Christ when he said: Teacher, I will follow you wherever you go. Christ rejected his offer because this was not to he the young man’s calling, even though he offered himself so readily to follow the Lord in all things
The angels in heaven and the demons in hell feared the penance of John, that is, they feared to see a man who was sanctified before he was born, a man who had never committed a mortal sin, be afflicted with such great penances. For what sins? I have no idea! From John’s situation we gain some insight into the justice and the rigor of God that a person experiences who, although free of the guilt of sin, assumes such penance. We learn also something of his attitude toward this life and its comforts.
From the fact that John left these things behind in such a manner, we may gather that he had one ear fixed upon the gate of hell, where he heard those inconsolable groanings, and the other ear fixed upon the blessedness of heaven, where he listened to those angelic songs. And so, in order not to suffer the former and lose the latter, John undertook such great penances. How deeply should that thought of judgment that must be undergone in God’s presence pierce the heart of a holy person.
Consider what Saint Paul said of himself: I am not aware of any sin, but I am not justified in this. It is the Lord who judges me.
Because of this Jeremiah says Set up road markers for yourself, put till guideposts; turn your attention to the highway by which you walked. Sinner, listen to the Holy Spirit. Stand firm with the road marker of contemplation, surrounded with the guideposts of penance. In the thought of your heart descend into hell, and through that thought ascend into heaven. Strengthened by this thought, turn your attention to the highway and concern yourselves with entering upon a safe road strive zealously lest you fall [or] lose your way.

Our Lady of the Rosary

National Dominican Pilgrimage to Knock Shrine
This site uses cookies to provide a good browsing experience: find out more on what cookies are.
Scroll to top