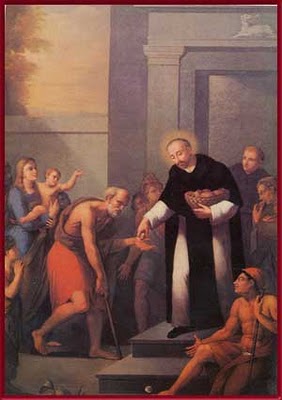 Juan Macias was born at Ribera in Estramadura, Spain, in 1595 of a noble but impoverished family. Orphaned in early childhood, .Juan worked as a shepherd for his relatives, an occupation which provided him time for prayer. Inspired by a vision he left his native country and set sail for the Americas, arriving finally in Lima, Peru, where. for a time he tended the sheep of a wealthy Spaniard. In 1623 he decided to enter the Order at the priory of Saint Mary Magdalene in Lima, where he served as porter for twenty-two years. Like his friend Saint Martin de Porres, he was known for his love and care for the poor and for his special devotion to the Rosary. He died on September 16, 1645.

From the homily of Pope Paul VI for the canonization of Saint Juan Macias.

“He was an admirable and eloquent witness to evangelical poverty.”

Juan Macias is an admirable and eloquent witness to evangelical poverty. As a young orphan he used his own shepherd’s wages to help other poor shepherds, “his co-workers,” and also shared his faith with them. Inspired by his patron, Saint John the Baptist, he emigrated, but he did not go for the sake of riches, as did so many others. He went to carry out God’s will. Both as porter and shepherd he quietly lavished his love on the needy, while at the same time he taught them to pray. As a religious he made his vows an eminent form of love for God and neighbor, for he “wanted only God for himself.” In his porter’s lodge he combined an intense life of prayer and penance with direct help to others and the distribution of food to veritable crowds of poor people. He even set aside a good portion of his own food so that he might give it to the hungry in whom faith enabled him to see the special presence of Jesus Christ. In short, was not the whole life of this “father of the poor, the orphan, the needy” a palpable demonstration of the fruitfulness of evangelical poverty when this is lived in full?

When we say that Juan Macias was poor, we do not mean the kind of poverty that can never be sought or blessed by God: the poverty which is culpable or due to passive inertia with regard to earning a legitimate sufficiency. We refer rather to that dignified poverty which seeks a modest livelihood through work.

How carefully and effectively Juan Macias devoted himself to his duties, before and after entering religious life! His employers and superiors gave clear evidence on this point. He always worked to win a livelihood for himself and his sister and for the many on whom he bestowed his charity. The bread thus earned is the fruit of socially creative toil and is an example to others. It brings human nature to perfection, redeems it, and conforms it to Christ. It also fosters in the soul a child-like confidence that the Father, who feeds the birds of the air and clothes the lilies of the field, will not fail to give his children what they need: Seek first the kingdom of God and the righteousness of God, and all these things will be given you besides.

Yet, the arduous labor of Juan Macias did not distract him from the Bread of Heaven. From childhood he had been familiar with the interior world of God’s presence and he became a contemplative in the midst of his activity.

His intimacy with God did not cause him to withdraw from others, rather if drew him to them and their needs with renewed zeal and energy so that he might help them and bring them to a life ever more worthy and noble, human and Christian.

In this he was but following the teaching and wishes of the Church, for, despite her predilection for the poor and her love of evangelical poverty, the Church never wants to leave the poor in their present condition but seeks rather to help them to reach increasingly higher standards of living which are more in keeping with their dignity as human beings and as children of God.

Even in this incomplete sketch of the man, we can see what a marvelously attractive person our saint was. He is a person for our time, and a brilliant example for us and our society.

In his lifetime Juan Macias was able to honor poverty in two ways: by the confident search for daily bread for the poor and by the constant quest of the Bread of the poor, Christ, who strengthens everyone and leads them to his transcendent goal. What a lesson for us and our materialistic world which is so often disfigured by unrestrained consumption and self-centeredness in society! What an eloquent example of the interior unity which the Christian must achieve by fulfilling his earthly tasks in faith and love!

Reception of the Habits 2010 The dishonest and wasteful steward
This site uses cookies to provide a good browsing experience: find out more on what cookies are.
Scroll to top