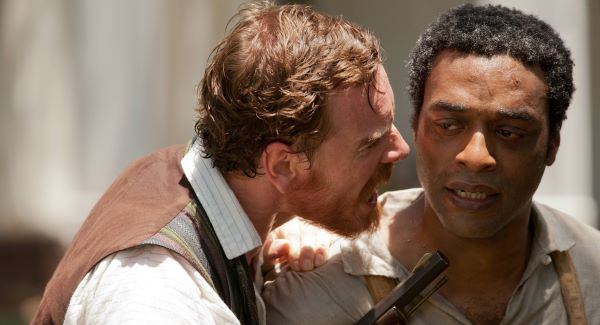 In 1841, Solomon Northup is a ‘free negro’ working as a skilled carpenter and fiddle player, and living with his wife and two children in Washington. Two men offer him a two-week job as a musician, but they drug Northup and he wakes up in chains, about to be sold into slavery. He is shipped to New Orleans, and is re-named ‘Platt’. Beaten repeatedly, he is sold to plantation owner William Ford. Northup manages to stay on good terms with Ford, a relatively kind master. However after a fight with his foremen he is sold to another plantation owner named Edwin Epps. Epps believes his right to abuse his slaves is justified by the Bible, and encourages the slaves to accept their fate by frequently reading to them fraudulent pro-slavery Bible verses. Epps also requires each slave to pick at least 200 pounds of cotton every day, or be beaten. He repeatedly rapes one of the slave-girls named Patsey, who asks for Northup’s help in committing suicide, but he refuses. Northup meets a Canadian carpenter named Bass (Brad Pitt). He asks for help in getting a letter to Washington. Bass, risking his life, agrees to do it. The plan works. After being enslaved for 12 years, Northup is restored to freedom and returned to his family.

On watching ‘12 Years A Slave’ I found it hard to believe that it is a true story simply because there is so much cruelty in it. I found myself asking the question, ‘How can one human being treat another like this?’ It also reminded me that such cruelty is still going on in the world today especially in developing countries, but also in Ireland where, for example, many girls are forced into prostitution.

On reflecting on the film I was reminded of the great Dominicans, Antonio de Montesinos and Bartolomé de las Casas. Montesinos was a Spanish Dominican friar on the island of Hispaniola (now the Dominican Republic and Haiti) who, with the backing of his Dominican community preached against the enslavement and harsh treatment of the indigenous peoples of the island. Montesinos’ preaching led to the conversion of Bartolomé de las Casas and his subsequent entry into the Dominican Order. According to de las Casas, Montesinos said in his famous sermon ‘Why do you keep them so oppressed and exhausted, without giving them enough to eat or curing them of the sicknesses they incur from the excessive labor you give them, and they die, or rather you kill them, in order to extract and acquire gold every day?’

The sermon outraged the conquistadors, including Admiral Diego Columbus (son of Christopher Columbus) and other representatives of the King, there present. The hard work of Montesinos and de las Casas eventually led the king of Spain to convene a commission which promulgated the Laws of Burgos, the first code of ordinances attempting to protect the indigenous people, regulate their treatment and conversion, and limit the demands of the Spanish colonizers upon them. Today we need brave people to continue the fight against the cruelty of slavery throughout the world. Here’s hoping that ‘12 Years A Slave’ will spur the consciences of its audience, perhaps even producing 21st-century counterparts to Montesinos and de las Casas.

No Man Can Be The Slave Of Two Masters

St. Patrick 'Come and Walk Amongst Us'
0 replies

Gentle Jesus Meek and Mild?
This site uses cookies to provide a good browsing experience: find out more on what cookies are.
Scroll to top