To mark the 2016 meeting in Dublin of the committee preparing the text of the next Hebrew Bible (Biblia Hebraica Quinta),
the Prior and Dominican community of St Mary’s Tallaght invited a representation of Irish academics to meet the visiting scholars of the committee, at a reception on  Friday 3 June, in St Mary’s Priory, Tallaght.

Biblia Hebraica Quinta is the fifth in the modern series of editions of the Hebrew Bible, dating from 1906 to the present.  It continues the best traditions of its four precursors. It also has many innovations in its methodology and in the service it provides for the academic community world-wide. Like them, it is published in Stuttgart, Germany under the auspices of the Deutsche Bibelgesellschaft. (This German Bible Society is entrusted by the world-wide Bible societies with the preparation of scholarly editions) The Biblia Hebraica editions continue to be those most used by scholars and students alike.

Seven volumes of this latest edition have so far appeared (2016).  Each contains the core text and accompanying material from the base Hebrew manuscript, which is Ms. Evr. 1 B 19a of the Russian State Library in St Petersburg (i.e. ML) the same as that used already for BHK and BHS.  It is the oldest complete manuscript of the Hebrew Bible, dating from 1009 C.E. in Cairo.It is accompanied by commentaries on the different elements of the text.  The next volumes to appear are expected to be Job, Leviticus and Ezekiel.  When the edition is completed, the text and accompanying material will be gathered together, and the commentary material will be in separate volume(s).

The committee and associated scholars normally meet every eighteen months, either in Stuttgart, home of the Deutsche Bibelgesellschaft, or in conjunction with an academic conference.  This is the first time Biblia Hebraica Quinta has met in Ireland.  By changing the venue to Dublin, the publishers wished to acknowledge the contribution of Sr Carmel McCarthy RSM, and of the Mercy order.  The coincidence between this celebration and the 800 Jubilee of the Dominicans did not go un-noted.

In addition to two solid days’ work, the weather in the week of the meeting was ideal for two outings:  the first across the Dublin hills, the featherbeds and Glencree to Dunlaoire, where we ate well.  The second visit was to the priory in Tallaght, where the garden was at its early summer best. In Tallaght Martin Cogan, the bursar organised a reception for our guests.This was very welcome opportunity for our visiting scholars to mix with scholars working in Ireland. It was a most pleasant occasion. 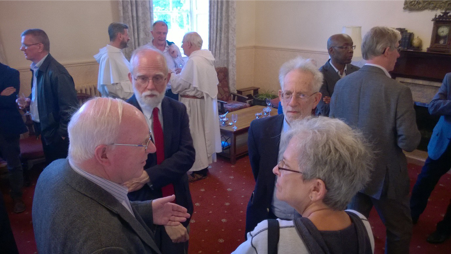 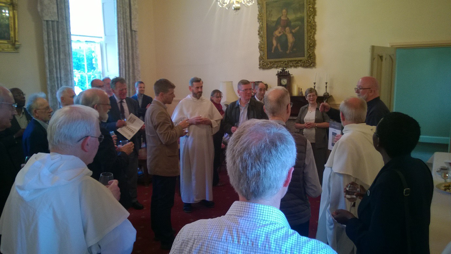 Altogether , about 40 people came together for the reception in Tallaght on 4th June.  A rough computation of nationalities present came to a total of  23.  Inevitably it turned out that many of these academics had worked together in places far from Tallaght’s hall, but this made the atmosphere all the more collegial.

The next meeting of the committee will take place in January 2018 in Stuttgart.

Light of Truth – Episode 05
This site uses cookies to provide a good browsing experience: find out more on what cookies are.
Scroll to top