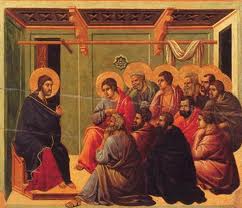 Would following Jesus be more palatable if He had asked us to give up just some of our possessions? That might not be so unreasonable given the fact that we give up some possessions everyday in the pursuit of different desires. If we are working we give up some of our time and labour for a weekly wage. We engage in trade everyday in the local shop, giving up just some of our  money for groceries. But to give up all? Very few true desires in us could make us want to give up everything. Jesus is really swimming against the tide here given the fact that we are more inclined to accumulate possessions rather than part with them. What might possibly make someone seriously consider this?

That depends I suppose, on the prize He is asking us to give up all our possessions for. If it costs us everything to follow Him then what He is promising in return must be pretty amazing. So rather than focussing initially on the cost, let’s check out the prize because that is usually what attracts us first isn’t it? Whether we see designer brands in the fashion store or the latest i-phone – we are first attracted by the good that appeals to us, then we wonder about the price, the value for money, the question of whether or not we can afford it. If we like it that much, whatever it is, we may try to find a way to attain it. This might mean saving, getting a second job or cutting out some luxuries we’ve become accustomed to but if we we really want it enough, we fight for it. Think of the contracts we enter in to when we want our own home? Our whole life then becomes so orientated towards this end that we are willing to give up so many other things for the next the thirty years or more to make it happen!

Jesus reckons this prize He is offering is so desirable that there should be nothing we would not be willing to pay for it. Can we say like the Psalmist, ‘O Lord You are my portion and cup, it is You Yourself who are my prize’? (Psalm 15: 2). Do we want the prize enough? Is a relationship with Jesus something we want and are willing to fight for or is it something we take for granted? He uses extreme examples to highlight the extent to which we ought to be willing to attain this union with Him. He talks about hating father, mother, sister and brother. There is something more happening here than the literal understanding of the text since hatred is not of Jesus. He is more of a lover. God’s commandments are quite clear in the precept to honour your father and mother. Jesus too is quite clear that the whole of the law hangs upon the two commandments of love of God and love of neighbour (Matthew 22: 37-40).

Note however that there is an order upon which these two commandments support the whole of the law. Love of God takes precedence. We must love God first. It is this fundamental realisation that allows us to love our neighbour authentically. St. Paul believes that ‘the sufferings of this present life are not worth comparing with the glory that is to be revealed to us’ (Romans 8: 18). Writing to the Corinthians he says that ‘eye has not seen, nor ear heard nor the mind of man conceived what God has in store for those who love Him’ (1 Corinthians 2: 9). The Lay Dominican Pier Giorgio Frassatti believed the day of his death would be the happiest day of his life. These are not morbid thoughts, rather they are the thoughts of people with their eyes on the prize. The prize puts perspective on the cost. Meditations on this union with God are a beautiful aid to prayer and may perhaps provide food for thought each time we come to Mass. This is the prize our whole Christian lives are ordered towards. Framed in this light we might re-consider Jesus’ proposal to love Him unconditionally, lest we find ourselves giving up the only true possession that is not worth giving up for anything.

Large crowds were traveling with Jesus, and turning to them he said: “If anyone comes to me and does not hate father and mother, wife and children, brothers and sisters—yes, even their own life—such a person cannot be my disciple. And whoever does not carry their cross and follow me cannot be my disciple. “Suppose one of you wants to build a tower. Won’t you first sit down and estimate the cost to see if you have enough money to complete it? For if you lay the foundation and are not able to finish it, everyone who sees it will ridicule you, saying, ‘This person began to build and wasn’t able to finish.’ “Or suppose a king is about to go to war against another king. Won’t he first sit down and consider whether he is able with ten thousand men to oppose the one coming against him with twenty thousand? If he is not able, he will send a delegation while the other is still a long way off and will ask for terms of peace. In the same way, those of you who do not give up everything you have cannot be my disciples.

The Equality of the Kingdom

Renewal of Simple Professions
This site uses cookies to provide a good browsing experience: find out more on what cookies are.
Scroll to top