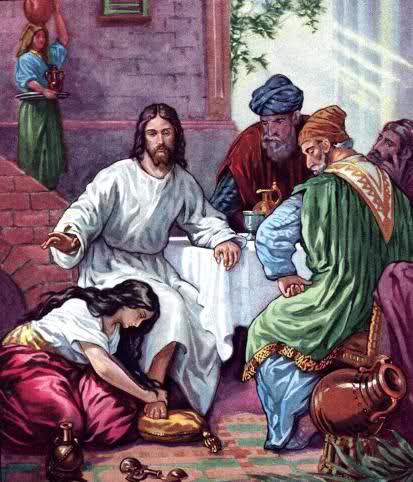 In this week’s Gospel, we come across a woman, rejected by the crowds, but loved by Our Lord. Jesus had being invited to the house of a Pharisee, and the Pharisees were a group who regarded themselves as being particularly important. No doubt, the Pharisee was delighted that such a large crowd had gathered to witness this memorable event. The last thing he expected was that the woman with the worst reputation in town would interrupt the party and create a scene. This was a potentially embarrassing situation, but the Pharisee comforts himself by thinking that, if Jesus really is a prophet, he will know who this woman is and force her to leave. Jesus of course, knows exactly who she is, but he does not reject her. Instead, he makes her the centre of attention.

So who is this woman in the Gospel? In actual fact, we are told very little about her. We don’t know any details concerning her background, or what happens to her afterwards. She is not even given a name. We know that she was a sinner (Jesus even confirms she had many sins), but we are not told what kind of sins she had committed, or why she had earned such a bad reputation in the town. Jesus talks about her to the Pharisee, but the woman herself never says a word. In many ways, she remains a mystery. And yet, we can understand something about her. We can relate to her because we all know what it is like to make mistakes in life. We have all experienced how our sins can leave us broken and wounded.

It can be easy to have faith when everything is going well. But when we are left in a mess because of some immoral choices we have made, we may find it difficult to return to our heavenly Father. Guilt can drive us to despair, and despair is the sin of believing that our weaknesses are stronger than God’s mercy. God is always ready to forgive, but accepting His love means accepting the infinite. God’s mercy goes beyond all human reasoning. His compassion is beyond our understanding. Therefore, we need to have faith. The Pharisee invited Jesus into his home, but he showed no sign of faith. The woman, on the other hand, recognised Jesus as her Saviour. She had committed great sins, but she believed God’s mercy was even greater than her weaknesses. ‘Go in peace’, Jesus says to her, ‘Your Faith has saved you’.

When one of the Pharisees invited Jesus to have dinner with him, he went to the Pharisee’s house and reclined at the table. A woman in that town who lived a sinful life learned that Jesus was eating at the Pharisee’s house, so she came there with an alabaster jar of perfume. As she stood behind him at his feet weeping, she began to wet his feet with her tears. Then she wiped them with her hair, kissed them and poured perfume on them. When the Pharisee who had invited him saw this, he said to himself, “If this man were a prophet, he would know who is touching him and what kind of woman she is — that she is a sinner.”

Jesus answered him, “Simon, I have something to tell you.” “Tell me, teacher,” he said. “Two people owed money to a certain moneylender. One owed him five hundred denarii, and the other fifty. Neither of them had the money to pay him back, so he forgave the debts of both. Now which of them will love him more?” Simon replied, “I suppose the one who had the bigger debt forgiven.” “You have judged correctly,” Jesus said. Then he turned toward the woman and said to Simon, “Do you see this woman? I came into your house. You did not give me any water for my feet, but she wet my feet with her tears and wiped them with her hair. You did not give me a kiss, but this woman, from the time I entered, has not stopped kissing my feet. You did not put oil on my head, but she has poured perfume on my feet. Therefore, I tell you, her many sins have been forgiven—as her great love has shown. But whoever has been forgiven little loves little.” Then Jesus said to her, “Your sins are forgiven.” The other guests began to say among themselves, “Who is this who even forgives sins?” Jesus said to the woman, “Your faith has saved you; go in peace.”

After this, Jesus traveled about from one town and village to another, proclaiming the good news of the kingdom of God. The Twelve were with him, and also some women who had been cured of evil spirits and diseases: Mary (called Magdalene) from whom seven demons had come out; Joanna the wife of Chuza, the manager of Herod’s household; Susanna; and many others. These women were helping to support them out of their own means.