It is a curious fact that while the study of Aquinas’ work has been somewhat sidelined in mainstream Catholic theology, philosophers and historians are more interested in him than ever. This collection of Aquinas Lectures at Maynooth (2002-2010), dedicated to the memory of the great Rev. Prof. James McEvoy and appended with essays by several of his students, is a testament to this lively contemporary engagement with the thought of the Angelic Doctor. Two names stand out among the contributors: William Desmond and Eleonore Stump. Desmond writes a stunning piece on the Beatitudes, marked by his trademark originality and his commitment to philosophy done ‘in a spirit of generosity towards [the] religious ‘other’’ (31). Stump’s piece takes on the thorny question of the problem of suffering, and she explains Aquinas’ theodicy with analytic rigour and sensitivity to the real experience of suffering.

Medievalists will find much to interest them in this volume. Philipp W. Rosemann traces the changes in theology’s self-understanding by comparing a textbook from the 12th century (Peter Lombard’s Sentences) with one from the 13th century (St Thomas’ Summa theologiae). John F. Boyle considers these two thinkers again, outlining the contents of a recently-edited commentary of St Thomas on Book I of the Lombard’s work. He notes that this ‘Roman commentary’ is ‘a work of the classroom; indeed the only work from Aquinas’ classroom that is not a commentary on Scripture’ (78). The role of Thomas’ own teacher, Albert, in mediating an ‘intellectual’ interpretation of the Dionysian corpus (as opposed to an ‘affective’ reading) is investigated in Declan Lawell’s essay. Finally, among these ‘historical’ pieces, Denys Turner gives full voice to the context of Thomas’ theological work as a Dominican enterprise. The Summa is explained as ‘friars’ theology… the one scrip that mendicant preachers must carry with them… in a word, a poor man’s theology, the poor Christ as theology’ (142).

The book isn’t all history, however. Several contributors bring Aquinas’ ideas into dialogue with those of our own time. Gaven Kerr distinguishes carefully between the realism of Aquinas from the idealism of Kant, engaging along the way with a dizzying array of modern philosophers, from Quine to Maréchal. The lecture by the late Thomas Kelly is dizzying too, but such is to be expected from any engagement with Heidegger. He analyses the recently published lectures on Aquinas given by Heidegger, focussing mainly on his treatment of the Five Ways. In the course of this treatment, Kelly nuances a Heidegerrian sweeping statement (‘philosophy lacks any organ for hearing revelation’), producing one of the most memorable passages of the book:

Julia Hynes’ piece on virtue ethics in a medical context brings things right up-to-date, defending Aquinas’ ethics against utilitarianism and deontology, noting that ‘what it was to be a person in St Thomas’ era remains the same in our time’.

It was particularly pleasing for this Dominican student to read two lectures given by Dominican friars who stand in a long tradition of Thomism. Both Liam Walsh OP and Vivian Boland OP have taught almost exclusively in the same context as St Thomas himself: Dominican studia. Their lectures (Walsh on Aquinas’ treatment of the Eucharist considered in the light of current ecumenical concerns; Boland on the doctrine of divine ideas in Aquinas) represent the continuation of a tradition of Dominican study for which St Thomas stands as the exemplar.

In his account of Thomas as teacher, Denys Turner waxes lyrical on the holiness of the ‘the theological teaching act’ performed by Aquinas, which is figured as a ‘disappearing act, a Christ-like ‘going away’ – so that the Spirit might come’ (151). To extend this metaphor, one might consider this volume of Aquinas Lectures to be a veritable ‘fruit of the Spirit’. Its contributors are as enthusiastic about their subject as the Apostles at Pentecost, and although I occasionally found myself ‘amazed and perplexed’ when reading these lectures, I was often, and happily, prompted to ask, with genuine curiosity: ‘What does this mean?’ (Acts 2:12).

(Thomas Aquinas: Teacher and Scholar, edited by James McEvoy, Michael Dunne & Julia Hynes, is published by Four Courts. This review, written by a Dominican student, appeared originally in The Furrow.) 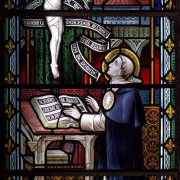 Book Review: Faith, Reason and the Existence of God

The Perfume of Preachers

The Presentation of the Lord
This site uses cookies to provide a good browsing experience: find out more on what cookies are.
Scroll to top