Vatican I decreed it to be a matter of faith that “God, the source and end of all things, can be known with certainty from the consider 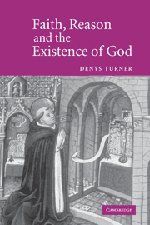 ation of created things, by the natural power of human reason.” Denys Turner, in this very rich treatment of the issue of proving the existence of God takes this assertion of Vatican I as the starting-point of his deliberations. He clarifies the parameters of what Vatican I states: it neither maintains that any successful proof for the existence of God on the basis of natural reason has to date been proffered nor that any such proof will be elaborated in the future. The point rather is that such a proof from natural reason is in principle possible – and that possibility is to be accepted as a matter of faith.

This proposition does not meet with overwhelming approval in contemporary theological circles – Catholic circles included. Barthians naturally object but adherents of the nouvelle théologie also reject a more traditional reading of the proofs, in particular those of St. Thomas Aquinas. On their interpretation the existence of God is ascertainable by reason but “only within and as presupposing the context of faith” (p. 14). Turner meets these interpretations head on and develops a highly compelling argument in support of Vatican I’s position.

On the way Turner engages with a myriad of important theologians and philosophers ranging from Dionysius the Areopagite to Jacques Derrida and passing through Bonaventure and Duns Scotus. Throughout his critiques are those of one clearly steeped in the thought of St. Thomas. Turner describes the relationship between Vatican I and Thomas as follows: “Thomas is doing as theologian what the first Vatican Council was doing as magisterium” (p. 47).

Scotus’s univocal metaphysics is often criticized by those who are critical of ‘ontotheology’, an error that consists in collapsing the reality both of the Divine Being and of finite beings into a common logic. Radical Orthodoxy theologians are among those who have led the charge. Turner’s treatment of Scotus is more benign, offering less negative critical appraisal of the Subtle Doctor’s theory of the univocity. His interpretation is supported by solid textual evidence.

Notwithstanding this academic graciousness, Turner argues robustly in favour of Thomas’s analogical understanding of being and shows forth the logical validity of arguing from premises to a conclusion “related to them across the ‘gap’ between creatures and God” (p. 208). Turner’s understanding of Thomas on analogy proves however to be excessively apophatic, grounded as it is in what Thomas Joseph White, O.P., describes as “The decision to make the created dependency of esse virtually the unique determinate for the consideration of divine names” (Wisdom in the Face of Modernity: A Study in Thomistic Natural Theology [Florida: Sapientia Press of Ave Maria University, 2009], 264).

The reader of Turner’s supremely fine study would be well-served by studying White’s analysis of Thomas on analogy, an analysis that appeals to “the progressive via inventionis of causal analysis in creatures” (ibid.). In support of this approach is Thomas’s appeal to Dionysius the Areopagite’s threefold via in On the Divine Names: the via causalitatis, the via negationis or remotionis, and the via eminentiae.

In spite of this criticism Turner’s study is a crucially important contribution to discourse concerning the relationship between faith and reason and dismantles the stance of those who deny the capacity of natural reason unaided by grace to demonstrate the existence of God.

It is all the same mystery.

St Saviour’s Symposium: Renewing Higher Education
This site uses cookies to provide a good browsing experience: find out more on what cookies are.
Scroll to top