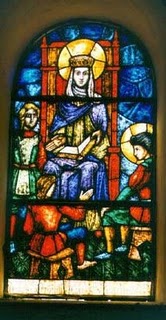 Blessed Jane was born in the prominent Aza family and married Felix de Guzman. Three of their Children spent their lives in the service of the Church – Anthony, Mannes and Dominic. An early source describes her as ‘virtuous, chaste, prudent, and full of compassion for the poor and the afflicted; among all the women of the region she was outstanding for her good reputation.’ She died at Caleruega, Spain, at the beginning of the thirteenth century.

From the Proper of Dominican Feasts:

From the Chronicle of the Saints of Rodrigo of Serrato.

“She was full of compassion.”

Blessed Dominic, head and illustrious father of the Preachers, who shone like a new star at the end of the twelfth century, was a native of Spain, of the kingdom of Castille, from the town of Caleruega in the diocese of Osma. It was fitting that at the close of the century, when the light of this world was sinking, it was from the farthest reaches of the earth that God brought forth in the West a light that would illuminate with its beams the whole world, a world wrapped in darkness.

So God, who knows the future and desired to show the Church what the quality and grandeur of this blessed man would be, decided to manifest Dominic’s future by several revelations. Before conceiving him his mother saw herself in a dream bearing in her womb a young dog; it was holding a burning torch in its mouth and, once it had emerged from her womb, it seemed to set the whole world on fire. This was the announcement that she would give birth to an eminent preacher who, with his flaming torch of eloquence, would rekindle that fire of charity which was being extinguished in the world. This proved to be true by the subsequent course of events. Dominic was able to reprove wickedness admirably, to fight against heresy and to exhort the faithful with great zeal.

His father was a venerable man, rich in worldly goods. His mother showed herself to be virtuous, chaste, prudent, full of compassion for the poor and the afflicted. Among all the women of the region she was outstanding for her good reputation.

In fact his mother was most compassionate. More or less in the period that I have mentioned, she saw the sufferings of the afflicted and, having already given extensively of her property, she exhausted it by distributing to the poor the contents of a cask full of wine, a cask which was well known to the neighborhood. As her husband was returning and approached Caleruega his neighbors came up to him and some of them told him about the wine which had been given to the poor.

When he arrived at home, in the presence of these neighbors Felix asked his wife to pour him some wine from the cask in question. She with no little sense of embarrassment went down into the cellar where the cask was and falling on her knees prayed to God in these words: “Lord Jesus Christ, even if I am not worthy to be heard by reason of my merits, hear me for the sake of your servant, my son, whom I have placed at your service.” For this mother knew the holiness of her son. Then rising up full of faith, she immediately went to the cask and found it full of the best wine. Giving thanks to the giver of every grace, she poured some of this wine for her husband and for the others, and it flowed in great abundance. Everyone was amazed.

Courage! It is I!
This site uses cookies to provide a good browsing experience: find out more on what cookies are.
Scroll to top