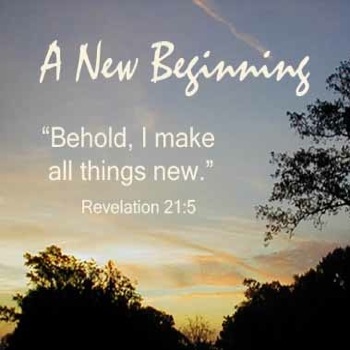 The first Sunday of Advent marks the beginning of a new year in the Church’s liturgical life. New beginnings are often marked by hope. No matter how badly wrong our efforts may have turned out in the past, a fresh start offers the possibility that things will fare better this time round. The disappointment of failure can be consigned to the past and forgotten about as we strive towards a brighter future, a future characterized by peace and joy.

The Gospel reading assigned by the Church to the first Sunday of Advent seems however to fly in the face of the hopeful expectations that new beginnings engender. Indeed, far from talking about beginnings, it deals with the end times. These end times, moreover, are marked by anything but peace and joy; they are rather times of great commotion and upheaval: signs in the moon and stars, nations in agony, men dying of fear, and even the heavens themselves shaken. Yet it is precisely in the midst of such turbulence that the Son of Man will come “with power and great glory.”

One does not need to develop an apocalyptic sense of history to understand the times in which we live as the end times described in the Gospel. The Christ-event – the Incarnation, death, and resurrection of Jesus Christ – has ushered in not only a new era in the history of humankind but has also initiated the end times during which we await his Second Coming.

Christ’s first coming has imparted a new beginning to the sinful history of humankind. By His dying and rising from the dead, He has freed us from the punishment due to original sin and given us all the great hope – even in the midst of great tribulation – of everlasting life with Him.

The Catechism of the Catholic Church tells us that “The virtue of hope responds to the aspiration to happiness which God has placed in the heart of every man; it takes up the hopes that inspire men’s activities and purifies them so as to order them to the Kingdom of heaven; it keeps man from discouragement; it sustains him during times of abandonment; it opens up his heart in expectation of eternal beatitude” (CCC 1818).

“There will be signs in the sun, moon and stars. On the earth, nations will be in anguish and perplexity at the roaring and tossing of the sea. People will faint from terror, apprehensive of what is coming on the world, for the heavenly bodies will be shaken. At that time they will see the Son of Man coming in a cloud with power and great glory. When these things begin to take place, stand up and lift up your heads, because your redemption is drawing near.” “Be careful, or your hearts will be weighed down with carousing, drunkenness and the anxieties of life, and that day will close on you suddenly like a trap. For it will come on all those who live on the face of the whole earth. Be always on the watch, and pray that you may be able to escape all that is about to happen, and that you may be able to stand before the Son of Man.”

Ears to Hear – Advent 2
This site uses cookies to provide a good browsing experience: find out more on what cookies are.
Scroll to top