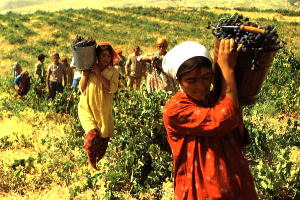 25th Sunday of the Year

This Sunday’s Gospel shows the insights of Christ into the psychology of fallen humanity and, more importantly, contrasts our way of seeing things with that of our heavenly Father.

A typical way of interpreting the story of the workers in the vineyard is to see it as a teaching on human ‘justice’ and divine generosity. According to our standards of fairness, workers should be paid for the amount of work they do, but the landowner in Jesus’ story gives the same pay – a denarius – to the latecomers as he does to those hired at daybreak. The latter group are furious: they worked through the day, in Mediterranean heat – surely they deserve more than the workers who hardly broke a sweat?  What’s important to note, though, is that the day-long workers were not being short-changed by the landowner, their pay was fair. What offended them was the lack of appropriate hierarchy in pay, and this response highlights a fatal flaw in fallen humanity: in order to be satisfied about our position, we must have people beneath us. It can be immensely comforting to us to know that we are not the least loved, the least noticed, the least important. We don’t all aspire to be top of the heap, but none of us is comfortable on the bottom of the pile.

So the workers exhibit a typically human response – how does the landowner respond? ‘My friend, I am not being unjust to you… I choose to pay the last-comer as much as I pay you. Have I no right to do what I like with my own? Why be envious because I am generous?’ There are two important points here. Firstly, Jesus is teaching us that the Father – represented in his story by the landowner – has given us life, love, grace, salvation as free, undeserved gifts. Secondly, we should resist the urge to ringfence these gifts for an exclusive, ‘in-crowd’ – God’s generosity should not spark envy in us, but praise.

There is another way of looking at this story, shared with our community by Fr Allan White OP when he was giving our community retreat. One morning in London he noticed a crowd of labourers, waiting to be selected by construction contractors. Periodically, vans would arrive, a contractor would emerge, and he would assess the workers, choosing those likely to work well for the day, and leaving the old and unfit behind. Eventually, only the unwanted were left, and they remained unemployed for the day. It was a ruthless process, one that is replicated in the natural world: survival of the fittest. What Fr Allan pointed out to us in his reading of this Gospel story is the exchange between the landowner and the last group of workers: ‘At about the eleventh hour he went out and found more men standing round, and he said to them, “Why have you been standing here idle all day?” “Because no one has hired us,” they answered. He said to them, “You go into my vineyard too”’.

It’s easy to imagine these men: lazy, or sick, or fat, or tired, or inexperienced – the least worthy of selection.  But the landowner does something no sensible contractor would do: he invites them to work! These words – ‘you go into my vineyard too’ – are addressed to anyone who was ever left behind, rejected or left unloved, to the losers, the perpetual victims and the weak, to the wounded, the bitter and the misfits. Despite what the world says about them and their capacities, in God’s eyes they too have important work to do, their life too has purpose and value.

Our heavenly Father is not looking for a team of champions, he’s not only interested in the best of the best, or the top of the heap. He stoops down even to the bottom of the pile and speaks welcome words to his beloved there: ‘you go into my vineyard too’.

Jesus said to his disciples: “For the kingdom of heaven is like a landowner who went out early in the morning to hire workers for his vineyard. He agreed to pay them a denarius for the day and sent them into his vineyard.About nine in the morning he went out and saw others standing in the marketplace doing nothing. He told them, ‘You also go and work in my vineyard, and I will pay you whatever is right.’ So they went. He went out again about noon and about three in the afternoon and did the same thing. About five in the afternoon he went out and found still others standing around. He asked them, ‘Why have you been standing here all day long doing nothing?’ ‘Because no one has hired us,’ they answered. He said to them, ‘You also go and work in my vineyard.’ When evening came, the owner of the vineyard said to his foreman, ‘Call the workers and pay them their wages, beginning with the last ones hired and going on to the first.’ The workers who were hired about five in the afternoon came and each received a denarius. So when those came who were hired first, they expected to receive more. But each one of them also received a denarius. When they received it, they began to grumble against the landowner. ‘These who were hired last worked only one hour,’ they said, ‘and you have made them equal to us who have borne the burden of the work and the heat of the day.’ But he answered one of them, ‘I am not being unfair to you, friend. Didn’t you agree to work for a denarius? Take your pay and go. I want to give the one who was hired last the same as I gave you. Don’t I have the right to do what I want with my own money? Or are you envious because I am generous?’ So the last will be first, and the first will be last.”
– Matthew 20:1-16

Reception of Habits & Simple Profession 2011
This site uses cookies to provide a good browsing experience: find out more on what cookies are.
Scroll to top