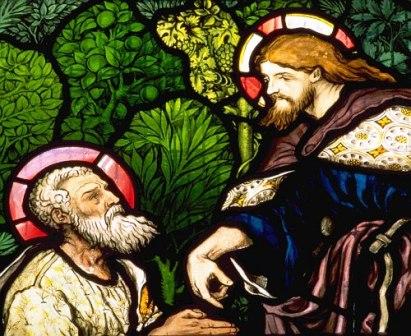 24th Sunday of the Year

On the way to Caeserea Philippi, Jesus asked his disciples; “Who do men say that I am”? This question could be well asked today, and many different answers are given in conversations. One common answer is that Jesus is a great man who unfortunately fell afoul of religious authorities and was killed for his revolutionary ideas. The person giving this answer will very quickly tell you that Jesus did have some great ideas, and they will probably mention the beatitudes or something else in the sermon on the mount, as an example of these. It may even be exclaimed that it is unfortunate that these ideas are not very practical because you cannot expect people to love their enemies in reality. However, such an idea of Jesus is not tenable when you read the Gospels. It is the same kind of answer that the Apostles give to Jesus. “Some say John the Baptist, others Elijah, others one of the Prophets”. They were only guessing, and the modern answer described above is similar in kind to the speculation of the people of Jesus’ time.

The sermon on the mount, which can be mentioned as an example of the great ideas of Jesus contains something much more than just great ideas. There is a lot more to it than is immediately apparent to someone who is living in our day. What Jesus said that day on the mountain came as a great shock to the people listening, and Matthew says that they marvelled at Jesus speaking with such authority. Pope Benedict in his first book on Jesus of Nazareth, uses the study of a Jewish Rabbi in order to bring out clearly and authoritatively what effect the sermon on the mount had on the listeners. The shocking thing for the Rabbi is the way that Jesus comments on holy Scripture. After saying: “you have heard it said” about something (e.g. you shall not kill), Jesus goes on to say: “but I say” (e.g. Do not be angry with your brother). The prophets did not speak in such a way, they were careful to say that they were only passing on what the Lord had told them to say. Not Jesus, He did not say: “the Lord says this”, which would be claiming to be a prophet, Jesus said: “I say”, in effect claiming to be the Lord Himself.

Hence, we discover the real reason the Pharisees and Sadducees of the time had such a problem with Jesus. When Jesus came right out and said: “Before Abraham was I am”, they sought to kill Him. G.K Chesterton in his famous work The Everlasting Man says that it is madness to think that Jesus is just a great man while not believing in His divinity. A great man knows himself, and the one thing that they do not do is go around claiming to be God. People get locked up for making such claims. If Jesus is a great man, then one has to take His claim seriously. Sometimes the question is asked, “why did the Jews not accept Him”? A better question would be “Why did so many Jews go on to accept Him?”

The answer to the first question is contained in this Sunday’s Gospel. Peter declares that Jesus is the Christ, but then rebukes Jesus for speaking about His passion. Why did Peter do so? The people of Israel were expecting a Saviour. However, they wanted a Messiah who would free them from the Romans. So did Peter. They did not think they wanted a Saviour who would free them from the bonds of sin. The answer to the second question, is the fact that Jesus rose from the dead. This is true even for the Apostles for Thomas did not accept that Jesus was risen until he saw Him. For in this Sunday’s Gospel is contained the answer to the second question as well, Jesus told the disciples that He would rise from the dead.

Jesus and his disciples went on to the villages around Caesarea Philippi. On the way he asked them, “Who do people say I am?” They replied, “Some say John the Baptist; others say Elijah; and still others, one of the prophets.” “But what about you?” he asked. “Who do you say I am?” Peter answered, “You are the Messiah.” Jesus warned them not to tell anyone about him. He then began to teach them that the Son of Man must suffer many things and be rejected by the elders, the chief priests and the teachers of the law, and that he must be killed and after three days rise again. He spoke plainly about this, and Peter took him aside and began to rebuke him. But when Jesus turned and looked at his disciples, he rebuked Peter. “Get behind me, Satan!” he said. “You do not have in mind the concerns of God, but merely human concerns.” Then he called the crowd to him along with his disciples and said: “Whoever wants to be my disciple must deny themselves and take up their cross and follow me. For whoever wants to save their life will lose it, but whoever loses their life for me and for the gospel will save it.

Habit receptions and first professions
This site uses cookies to provide a good browsing experience: find out more on what cookies are.
Scroll to top