The 14th of September, the Feast of the Exaltation of the Cross, is the traditional day in which new novices in the Irish Province of the Dominicans receive their habit and start their noviciate year. It is then followed on the 15th of September, the Feast of Our Lady of Sorrows, by the simple profession of the novices who finished their noviciate year and who will subsequently move to the students’ house in St. Saviour’s, Dublin. 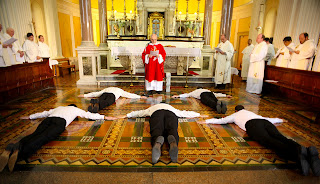 This year, the Irish Dominicans received five young men into their novitiate. The new novices, four from Ireland and one from Trinidad, were clothed in the habit of the Dominican Order which marks their entry to the novitiate.

The five new Dominican brothers have now begun their novitiate year during which they will live in the Dominican community of St Mary’s, Cork, and learn the ways of the Order, its laws, customs, history and traditions. 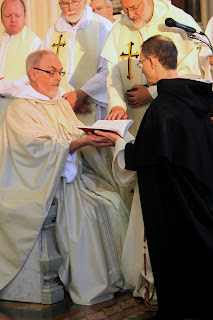 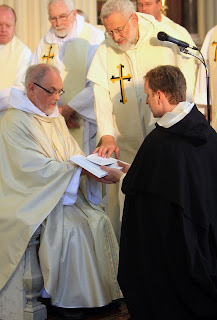 Then the next day on the Feast of Our Lady of Sorrows, two brothers made their first profession as Irish Dominicans.

Following the reception of the five brothers into the novitiate on the 14th of September and the two professions on the 15th, the Irish Dominican friars have at present twenty two brothers in formation: six novices and sixteen brothers who are at various stages in their formation of whom two are already priests and three have already made their solemn profession. Two of these twenty two brothers are for our vicariate in Trinidad & Tobago, one being a novice and one a student in solemn vows.

Please pray for our twenty two brothers in formation, for those who are considering joining us and for all the friars who assist them.

Further pictures of the clothing ceremony or the professions can be seen on the vocations blog.

Who Do Men Say That I Am?

Video of the Habit receptions and first professions
This site uses cookies to provide a good browsing experience: find out more on what cookies are.
Scroll to top