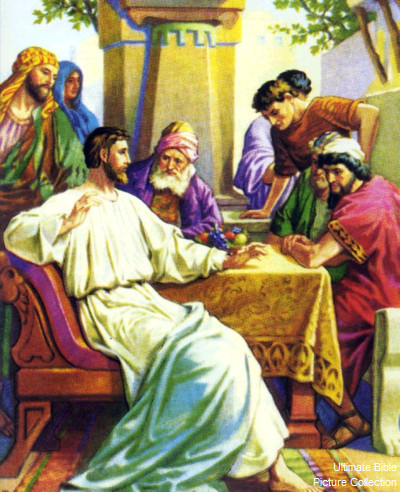 Why do elite societies fascinate us? When I was at university, there was a semi-secret association of wealthy and influential students who would hold occasional dinner parties. To these dinner parties, they would invite a select group of worthy diners. For many, to find such an invitation in one’s postbox was a thrilling event. Why? Above all, I think, because it meant being chosen above others. These events were exclusive, and being invited meant that you stood above the mob.
Imagine one of these lucky invitees turning up to their fancy dinner party to find a crowd of beggars sitting at table, awaiting the arrival of their fellow guest. How their bubble would burst! They’re being lumped in with this lot?!

Table etiquette is present in every culture, and nearly always involves some kind of hierarchy. In ancient Rome, dinner parties were held on couches, where the host had an assigned seat, as did the guest of honour. In Afghanistan, diners sit relaxed on the floor, but in a very clear hierarchy. In China, the guest of honour sits facing the doorway. In the Western world, we still have some notions of ‘the head of the table’. The Kingdom of God which Christ preached had a very different table etiquette. There, guests should seek out the humbler places: ‘go and sit in the lowest place’. Haughty guests are demoted, but the lowly are upgraded: ‘every one who exalts himself will be humbled, and he who humbles himself will be exalted’.

In the first reading, we find an even clearer indication of the radical equality of the Kingdom of God: ‘you have come to Mount Zion… and to the assembly of the first-born’. On Mount Zion, the heavenly Jerusalem, all are counted as first-born, all have equal rights of inheritance, for what they inherit is God himself, who cannot be made into portions. The inheritance is beyond our wildest dreams, but to accept it, we must take our place in the mob, letting go of all claims to exclusivity.
How should this vision of heaven inform our activity in this world? Jesus’ message is striking: ‘when you give a dinner or a banquet, do not invite your friends or your brothers or your kinsmen or rich neighbours… but invite the poor, the maimed, the lame, the blind’. As Christians, we are to use meals and celebrations not as opportunities to further our reputation, but as occasions to reflect the generous love of God, who has no favourites.

One Sabbath, when Jesus went to eat in the house of a prominent Pharisee, he was being carefully watched. When he noticed how the guests picked the places of honor at the table, he told them this parable: “When someone invites you to a wedding feast, do not take the place of honor, for a person more distinguished than you may have been invited. If so, the host who invited both of you will come and say to you, ‘Give this person your seat.’ Then, humiliated, you will have to take the least important place. But when you are invited, take the lowest place, so that when your host comes, he will say to you, ‘Friend, move up to a better place.’ Then you will be honored in the presence of all the other guests. For all those who exalt themselves will be humbled, and those who humble themselves will be exalted.” Then Jesus said to his host, “When you give a luncheon or dinner, do not invite your friends, your brothers or sisters, your relatives, or your rich neighbors; if you do, they may invite you back and so you will be repaid. But when you give a banquet, invite the poor, the crippled, the lame, the blind, and you will be blessed. Although they cannot repay you, you will be repaid at the resurrection of the righteous.”

Lord Help Me to Believe

To Give Up Everything For Christ
This site uses cookies to provide a good browsing experience: find out more on what cookies are.
Scroll to top