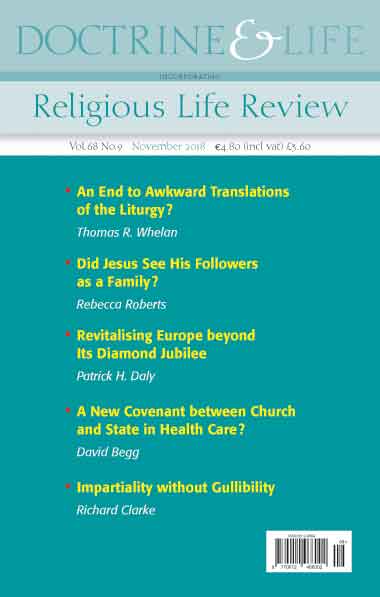 Please find below some of the articles in the November 2018 edition of Doctrine & Life.

An End to Awkward Translations of the Liturgy?

Thomas R. Whelan surveys the battles surrounding the translation of the Mass into a style of English suitable for public proclamation. While commenting on Lost in Translation: The English Language and the Catholic Mass, by Gerald O’Collins with John Wilkins, he points to the ways by which, during previous papacies, Rome took control of the translation process. He recognises that Pope Francis is now providing for the exercise of authority in the matter where it belongs, with local conferences of bishops.

Did Jesus See His Followers as a Family?

Rebecca Roberts examines the passages in Mark where Jesus calls his followers away from their own families and defines his kin group with a new set of values.

Re-vitalizing Europe beyond Its Diamond Jubilee

Patrick H. Daly describes a dialogue encounter held in Rome at the end of 2017, to mark the sixtieth anniversary of the Treaty of Rome. He addresses problems now facing the European Union and points to ways in which the Church could put wind in the EU’s sails, recognising, with Pope Francis, that dialogue is a fundamental responsibility of politics.

Can We Have God without Heaven?

Martin Henry suggests that God honours us, as it were, by letting the apparent, humble ordinariness of our lives become a fundamental ingredient in the reality of the glory of heaven.

A New Dialogue between Church and State in Health Care?

Archbishop Richard Clarke surveys themes in the writings of Elizabeth Bowen, especially her pointing to an innate and almost certainly unintended cruelty within innocence.

Ian Linden reflects on the canonization of Oscar Romero and on the actions both of his followers and of his detractors that delayed that proclamation.

A Month to Remember

John Scally is reminded in November of the death of his cousin Oliver, and of how suffering, particularly after the death of a loved one often appears an unanswerable conundrum for those who believe in the Christian God and it often rouses us to anger.

What Makes the Gospel of John Special?

Amanda Dillon reviews The Sign: Reading the Gospel of John, by Seán Goan.

To read an article from this issue, go to www.dominicanpublications.com