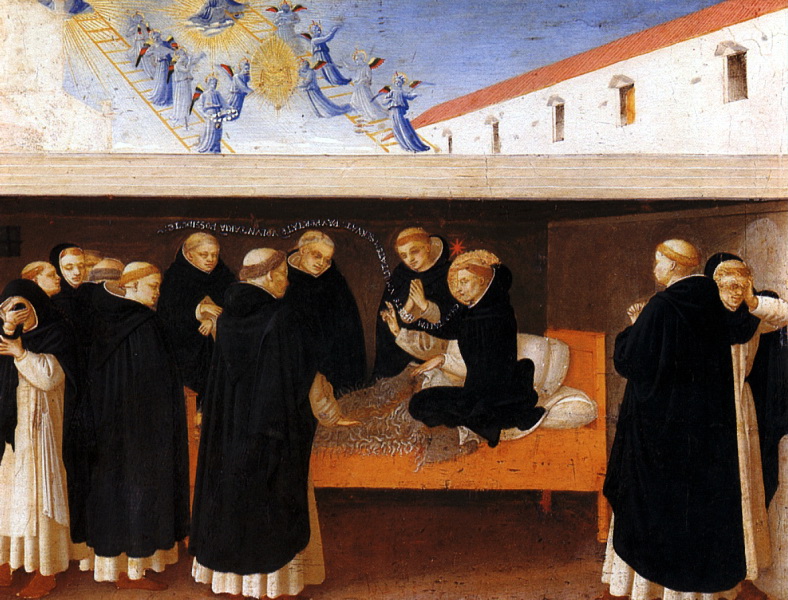 The Grace of Preaching Blessed Moneta of Cremona was a contemporary of St Dominic and is famous for two things; loaning our Holy Father a bed to die on and giving him a tunic to be buried in. Being very much esteemed as a professor at the University of Bologna, we are told of his resentment and envy at the success of Master Reginald of Orleans in recruiting students from the University for the rapidly growing Order of Friars Preachers. After warning his students not to go to listen to Reginald, Moneta tried his utmost to avoid any occasion where he might encounter Master Reginald’s preaching. His students after heeding his words and attending his class instead of going to listen to Reginald, begged him to accompany them to the Cathedral the next day. Moneta giving way to their pleas went to the Cathedral with his students on the Feast of St Stephen, and finding the Cathedral full, remained at the door.  Reginald, reading the Gospel describing St Stephen’s experience of a theophany, told the crowded Cathedral to lift their gaze heavenward like St Stephen who “seeing the heaven’s opened” beheld his savior. This was the moment when grace ignited the flame in Moneta’s heart and lifting his gaze heavenward he decided to follow his Lord. Moneta falling at the knees of Reginald begged to receive the Habit of St Dominic.

The grace of Christ can penetrate the most obstinate heart. Christ thirsts for us and will go to great lengths to enlist us in His service and to call us to intimate friendship with Him. What Blessed Moneta’s story highlights for us is the power of God’s Word to effect change in a person’s life; a power that enables one to turn from the preoccupations of the world and fix their gaze heavenward upon Him who alone can satisfy the human heart. This Word is incisive; “it is alive and active, sharper than any double edged sword,” (Hebrews 4:12) and when it finds a home in us its transforming power opens for us the treasures of heaven and the life of grace is offered to us. Like Blessed Moneta many are being invited to enter into relationship with our Lord, but maybe the grace that is moving them towards Him is being smothered by the cares of this world. Let us not resist His advances but take a moment to listen to that “still small voice”  (1 Kings 19: 12) that calls us out from beyond the confines of our selfish desires and assures us that in the gift of oneself we find true freedom.

Blessed Moneta of Cremona died in 1235 in the convent of Bologna. He, whose eyes were opened anew on that St Stephen’s Day suffered from blindness in the eve of his life, teaching others by the example of his holiness of life and joyful resignation in the face of suffering. This ‘athlete of the faith’ and ‘well-known miracle worker’ highlights for us the irresistibility of God’s grace when one cultivates the disposition to receive it, and the power of His Word when preached in the Holy Spirit.

Light of the World!

Symposium: Dante’s Ulysses
This site uses cookies to provide a good browsing experience: find out more on what cookies are.
Scroll to top