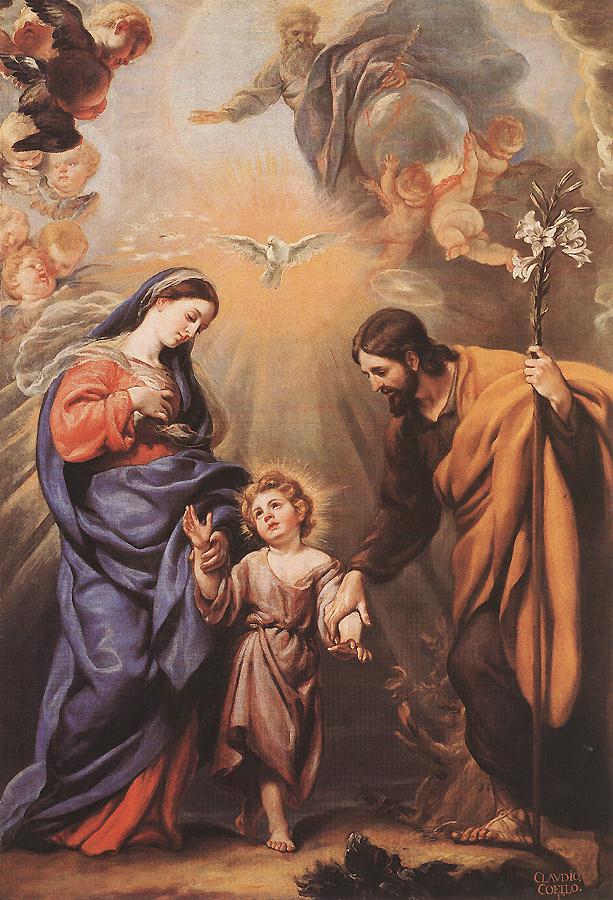 Feast of the Most Holy Family We see in the holy family of Jesus, Mary and Joseph the model of family life. It is fitting that we should once again gaze upon the holy family today, given that modern notions of family take on many different forms. Some leading academics who study the sociology of the family for example, consider ‘doing family’ as a series of choices. It is no more than an agreement that independent actors buy in to. Family life is something of an economic trade–off between individuals who are free to define, constantly redefine and ultimately withdraw from at any stage if they no longer reap personal benefits from the contractual basis underpinning their common life together. A fundamental denial of any natural bonds that nourish family life is de–humanising. Furthermore, the uncertainty and instability that comes with this kind of unlimited freedom, subject only to our inconsistent individual desires perhaps reflects the instability and uncertainty we see at a wider societal level. When considered from a purely Marxist perspective which revises history and seeks to redraft the very essence of what it is to be human, this freedom to design families finds an able ally in post-Christian societies.

Compare this with the Christian society per se; the society of Christ’s family. Today’s Gospel presents a radically different view of family relations. The holy family is a community resembling the community of the most Holy Trinity, bound together by love. It would be naïve to think that Jesus, Mary and Joseph were not influenced by external social, cultural and economic factors as modern families are. Indeed, there was a time when Joseph considered divorcing his wife informally because of the inconsistency of their unique situation with the prevailing cultural norms (Matthew 1:18-24). In many ways modern Catholic families too find themselves towing a counter–cultural line because like the holy family in today’s Gospel, they believe and they participate as a family in giving glory to God through the liturgy. Joseph’s love for God and his family helped him through a difficult period. Sadly today, many people opting for civil ceremonies do not want God to be part of their relationship. Accordingly, they have no root, no support, when they meet difficulties because unlike Joseph who drew on God, it is beyond the capabilities of the impersonal, indifferent State before whom they have publicly professed their union, to uphold them.

Imagine Mary too, distraught at the absence of her son for three days. If, as Solomon says, that ‘love is strong as death’ (Songs 8:6), consider the martyrdom of Mary who perhaps felt the separation from her son in terms of separation from God himself. For such a contemplative and adorer of her son in her heart, we can only imagine the torment she was going through. Joseph, ever silent in the Gospels but with an unmistakable fatherly presence throughout, suffers too. ‘See how worried your father and I have been?’ Mary exclaims. It is perhaps the kind of scenario many parents dread as their children come of age. Rebellious adolescents present challenges. The difference in outlooks between the generations is often most vivid. So much so that parents and teens often don’t understand each other; it is difficult to communicate. Neither did Mary or Joseph understand Jesus we are told (Luke 2:50).

Jesus, for his part, raises the bar for all children in families when he ‘lives under their authority (Luke 2:51).’ This is remarkable not only because authority is seen to be something oppressive in the modern age but because God would choose to be obedient to his creatures. That is an amazing thought. God’s utter humility, rooted in true love for us, ensured Jesus would come as a vulnerable baby in Bethlehem. It ensured he would live under the authority of humans in Nazareth. It meant Jesus would wash disciples’ feet, do his Father’s will and not his own in the garden and ultimately commend himself in the most vulnerable fashion into the hands of weak men each time they say ‘this is My Body’, at Mass. With such thoughts and such a model of family life as presented to us today by St. Luke, it is evident that ‘family’ is so much more than an economic entity. The kind of self-giving love displayed in today’s Gospel guarantees that the holy family still has so much to offer as a template for family life and indeed, what it is to be human. God is love and to those who argue that promoting traditional family forms is old–fashioned or inconsistent with modern culture, it should be argued that modern culture is inconsistent with the beauty and freedom of family life founded on God.

Every year Jesus’ parents went to Jerusalem for the Festival of the Passover. When he was twelve years old, they went up to the festival, according to the custom. After the festival was over, while his parents were returning home, the boy Jesus stayed behind in Jerusalem, but they were unaware of it. Thinking he was in their company, they traveled on for a day. Then they began looking for him among their relatives and friends. When they did not find him, they went back to Jerusalem to look for him. After three days they found him in the temple courts, sitting among the teachers, listening to them and asking them questions. Everyone who heard him was amazed at his understanding and his answers. When his parents saw him, they were astonished. His mother said to him, “Son, why have you treated us like this? Your father and I have been anxiously searching for you.” “Why were you searching for me?” he asked. “Didn’t you know I had to be in my Father’s house?” But they did not understand what he was saying to them. Then he went down to Nazareth with them and was obedient to them. But his mother treasured all these things in her heart. And Jesus grew in wisdom and stature, and in favor with God and man.

A Child Is Born For Us

Mary the Mother of God
This site uses cookies to provide a good browsing experience: find out more on what cookies are.
Scroll to top